So You Are Going To Be In A Wedding: The How To Guide On Being The Perfect Bridesmaid 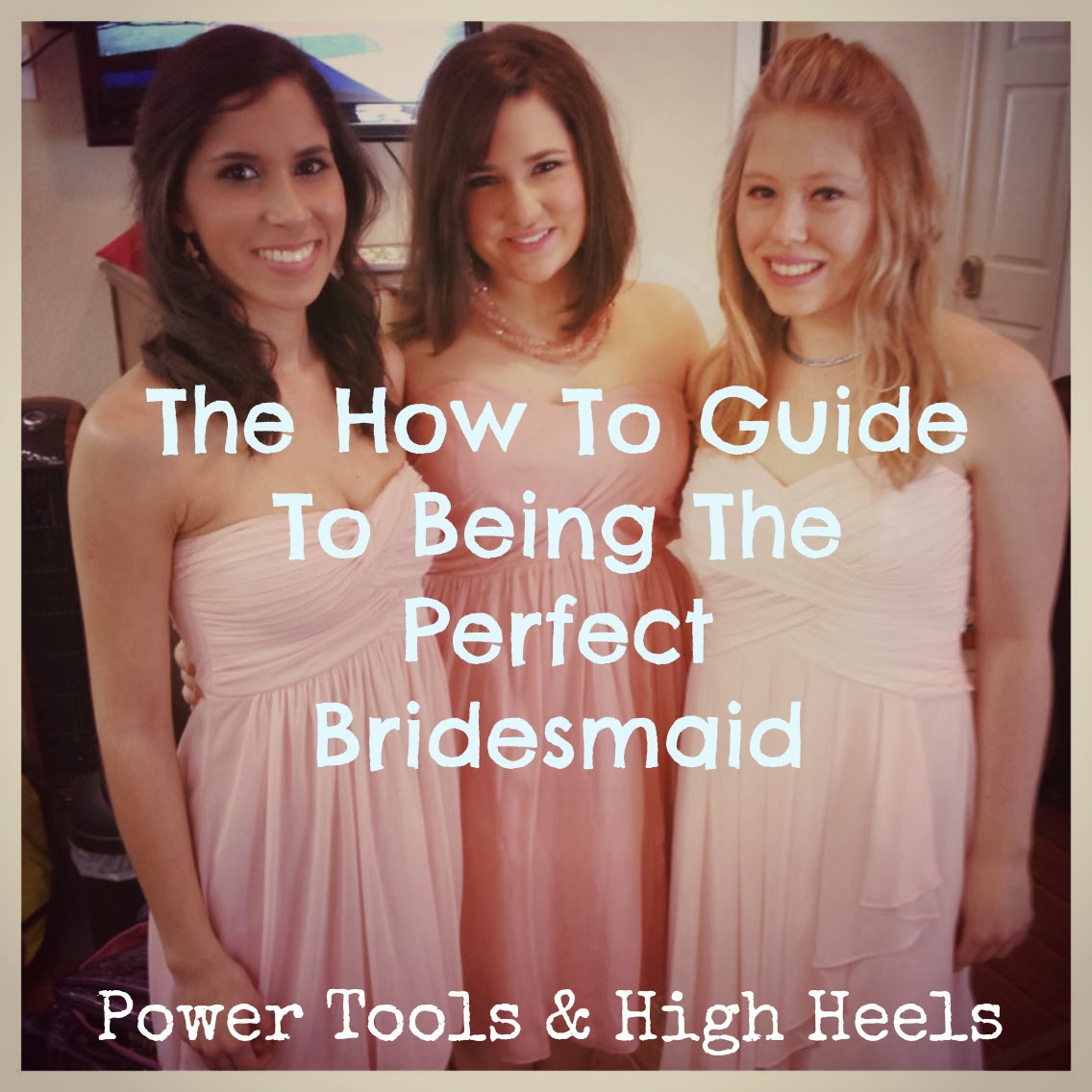 This year has been many of lasts and firsts for me.  I am finishing up my last semester of college at Texas A&M (insert whoop and a few tears here) and have started looking for my first big girl job as a teacher.  But for anyone who has ever been 22 and graduating knows it also means everyone and there cousins are getting engaged, married, and having babies! Let's just say I am one of those saying, "If another one of my Facebook friends gets engaged I am going to chunk this computer!!!" Well my best friend and roommate of two years was one of those lovely friends that found her man and some how convinced him to marry her.  And so begins my life of bridal showers, bachelorette parties and the most dreaded bridesmaid dress shopping. Now, that my life is starting to slow down some and this fun is coming to a close...for now. I figured I would take the time to type up a How To Guide on surviving being a bridesmaid.  Sooo, here I go.

Bridal Shower/ Bachelorette Party
1. Establish who is going to head the event up. Splitting the responsibility up among the people throwing the parties is great in theory but we all know that does not always work too well.  In my case I asked if the two other girls would mind if I took the lead and kept them informed, gave them options, and asked for their input.
2. Determine how you will pay for the party.  Will you split it all at the end? Will someone front all the money and then determine each persons share? Will you go as a group and buy everything together and split it up that way? Will you buy it as you go? What is your budget?
3. Plan several weeks/months in advance.  My group started to talk about this in late November but didn't start really planning till mid December and the party wasn't until the last week of January! By planning in advance you will avoid the stress of last minute running around.  It will also allow you to get all those adorable things people, like myself, sell on etsy because sometimes it takes a few weeks to get things shipped.  Bride To Be Sash
4. Save money by: shopping sales, using coupons,  and making your own stuff instead of buying off etsy.
5. Another idea to save money is what we did, we combined the two parties together and did a all day/ weekend party.
6. Search pinterest for inspiration.

Leading up to the big day
1. Rent your dress if possible instead of buying one! Come on, how many times will you wear that dress again? Umm NONE! I was able to rent my dress from a company called Little Borrowed Dress. It was cheap and  easy but with that being said expect a "cheaper" dress to arrive.  I wasn't too fired up about the dress when I tried it on and I messed with it the whole night because I really was in between the two sizes I ordered but would I do it again? Definitely! So far returning the dress was as easy as getting it! It arrived two weeks before the wedding and unlike several other places they ship you two dresses in two different sizes for the same price! Out of all the rental sites I found (which are few and far between) I found this one to be the best one for the best price.  Even though I did not love the dress on me I will say in several of the pictures I have seen so far from this weekend it photographed well.
2. Make your appointments early! Hair, makeup, nails, and even spray tanning if you are like me and are pretty pale and your color is really light you will need it! You can also save money here is you do the obvious and do your own but sometimes the brides insist that you get your hair, make up, and nails done professionally (luckily my bride isn't one of those).
3. Give the best gift your bride will ever get and she will actually use it! I gave my cousin a bridal survival kit that I actually made and she swears she doesn't know what she would have done without it she used every single thing in the kit! Here is a list of a few things I put in it: hair spray, bobby pins, clothes pins, deodorant, tooth brush, tooth paste, mouth wash, tissues, stain remover, advil, lint brush, hair brush, comb, and maybe even add a little bottle of liquid courage. Another idea is giving her a wedding planner for her to keep all the important things in one place!
4. Call the bride every so often to check on her.  Don't call her every day or several times a week (unless she asks you too) but call her maybe once every week or so to see if there is anything she needs help on or to let her vent about the disaster with the floral arrangements or how she couldn't get the DJ she wanted.
5. Last but not least remember it is HER day NOT YOURS! If she picks an ugly dress suck it up! If its an outdoor wedding and its raining and you have to run out in the rain to get things for her and ruin your hair and make up, don't complain! Be helpful make her glad she asked you to be apart of one of the most important days in her life!

Things no one talks/warns you about!
1. The cost! Between the dress, shoes, make up, hair, nails, gifts, parties, gas to get everywhere, the hotels and maybe even airfare it is going to cost you A LOT!!!
2. Dealing with other bridesmaids! You think the worse part would be the bride? Think again! I personally haven't experienced this but I know several people I am close friends with have and trust me the stories I have heard! Sometimes you need to be that person for your bride who doesn't cause the problems but tries to solve them.
3. MAKE THE BRIDE EAT!!! Shove it down her throat if you have to! Now this one I will tell you I was told by the grooms family a hundred times but I knew my bride well enough to know I had to make her eat even though she was too nervous.  I lived with her for almost three years and trust me no one wants her to ever be hungry!
4. Be prepared! Planing for anything and everything like: a drunk bride, if it is raining, snowing, or the coldest week in March Texas has ever seen (yeah they had to shut down the schools this week where the wedding is being held! Our rehearsal was outside in 40 degree weather, raining and strong winds needless to say we were popsicle).  Have someone to be in charge of the brides phone and responsible to handle all issues that might come up. The bride shouldn't have to worry about whether or not the cater is lost and is calling for directions or if their friend who has never been to a wedding before is just calling to talk to her while she is getting ready! Be prepared!


These are just some things I have experienced, read about, or been told by other people so I figured that I should write them down.  That way that bridesmaid who has never been one before like myself has something to go by and knows what to expect! With that being said "We're going to the chapel and Ana is going to get married!"